A report published Wednesday by the University of California, San Diego, calculates that American households collectively consumed 3.6 zettabytes of information in 2008. The paper — entitled “How Much Information?” — explores all forms of American communication and consumption and hopes to create a census of the information we consume.

I’ll be honest: this is the first time I’ve ever used the word zettabyte. I’ve heard of petabytes and even exabytes, but zettabytes are a whole new level of bytes. If a zettabyte is beyond your comprehension, too, it’s essentially one billion trillion bytes: a 1 with 21 zeros at the end. To put that into perspective, one exabyte — which equals 1/1000 of a zettabyte or 1 billion gigabytes — is roughly equivalent to the capacity of 5.1 million computer hard drives, or all the hard drives in Minnesota. 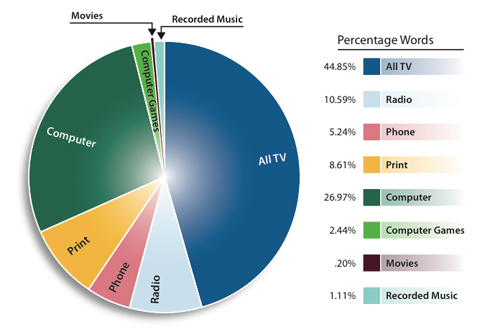 HMI Report/UC San Diego A graph from the report illustrating the dissection of words consumed each day.

So where does all this information we consume come from? Everywhere, it turns out. The report suggests the average American consumes 34 gigabytes of content and 100,000 words of information in a single day. (Leo Tolstoy’s “War and Peace” is only 460,000 words long.) This doesn’t mean we read 100,000 words a day — it means that 100,000 words cross our eyes and ears in a single 24-hour period. That information comes through various channels, including the television, radio, the Web, text messages and video games.

The report also describes our voracious appetite for information and entertainment. In addition to the amount of information we consume, the researchers looked at how much time we devote to each medium. The study suggests that, on average, most Americans consume 11.8 hours of information a day. Most of this time is spent in front of some sort of screen watching TV-related content, taking up a little over four and a half hours of our daily information consumption. Then there’s the computer, which we interact with for about two hours a day. There’s also the phone, radio, music, and print. Most of these experiences happen simultaneously, too, such as talking on the phone while checking our e-mail, or instant messaging while watching TV.

The report also found a huge increase in the number of bytes we consume related to video games. Roger Bohn, professor of technology management and co-author of the study, said, “Gaming saw the biggest leap in the number of bytes we consume and the amount of time devoted to this platform.” This isn’t just first-person shooting games but also includes lots of analytical games like Bookworm, Tetris as well as social networking games.

Bohn also told me, “Print media has declined consistently, but if you add up the amount of time people spend surfing the Web, they are actually reading more than ever.”

Overall, from 1980 to 2008, the number of bytes we consume has increased 6 percent each year, the researchers said, adding up to a 350 percent increase over 28 years. At this rate, it won’t be long before we’re marveling at the next level of bytes: yottabytes.